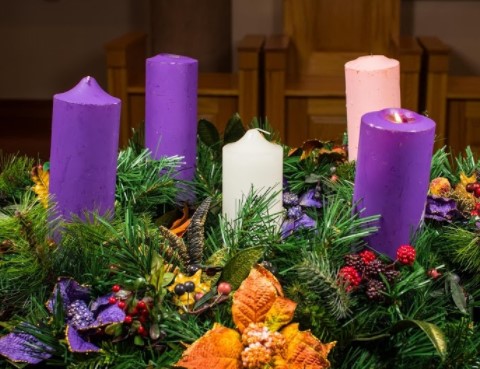 The Call of Abram

12 1 The Lord had said to Abram, “Go from your country, your people and your father’s household to the land I will show you.

4 So Abram went, as the Lord had told him; and Lot went with him. Abram was seventy-five years old when he set out from Harran. 5 He took his wife Sarai, his nephew Lot, all the possessions they had accumulated and the people they had acquired in Harran, and they set out for the land of Canaan, and they arrived there.

6 Abram travelled through the land as far as the site of the great tree of Moreh at Shechem. At that time the Canaanites were in the land. 7 The Lord appeared to Abram and said, “To your offspring[c] I will give this land.” So he built an altar there to the Lord, who had appeared to him.

8 From there he went on toward the hills east of Bethel and pitched his tent, with Bethel on the west and Ai on the east. There he built an altar to the Lord and called on the name of the Lord.

9 Then Abram set out and continued toward the Negev.

31 Now the serpent was more crafty than any of the wild animals the Lord God had made. He said to the woman, “Did God really say, ‘You must not eat from any tree in the garden’?”

4 “You will not certainly die,” the serpent said to the woman. 5 “For God knows that when you eat from it your eyes will be opened, and you will be like God, knowing good and evil.”

6 When the woman saw that the fruit of the tree was good for food and pleasing to the eye, and also desirable for gaining wisdom, she took some and ate it. She also gave some to her husband, who was with her, and he ate it. 7 Then the eyes of both of them were opened, and they realized they were naked; so they sewed fig leaves together and made coverings for themselves.

8 Then the man and his wife heard the sound of the Lord God as he was walking in the garden in the cool of the day, and they hid from the Lord God among the trees of the garden. 9 But the Lord God called to the man, “Where are you?”

10 He answered, “I heard you in the garden, and I was afraid because I was naked; so I hid.”

11 And he said, “Who told you that you were naked? Have you eaten from the tree that I commanded you not to eat from?”

12 The man said, “The woman you put here with me—she gave me some fruit from the tree, and I ate it.”

13 Then the Lord God said to the woman, “What is this you have done?”

The woman said, “The serpent deceived me, and I ate.”

Sunday 21 November 2021 – Two outdoor services were held in the grounds of the Kindergarten at the rear of the church. Attendance was limited to a maximum of 25 persons at each to comply with Covid regulations and social distancing was maintained.

We were blessed with fine weather! 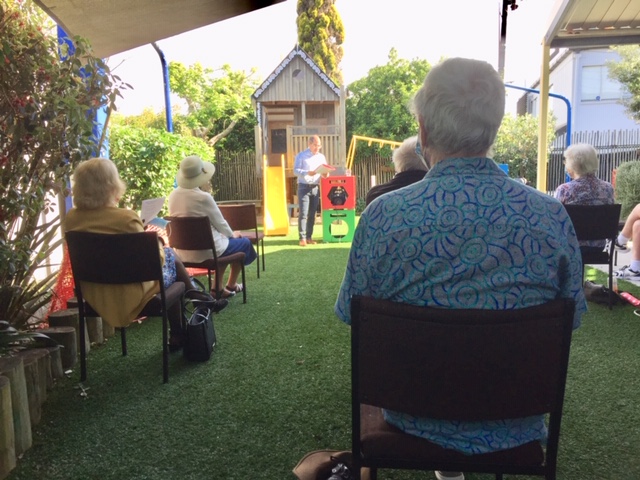 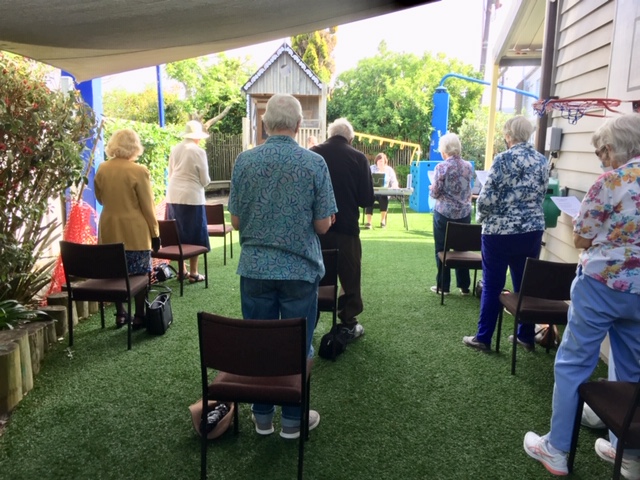 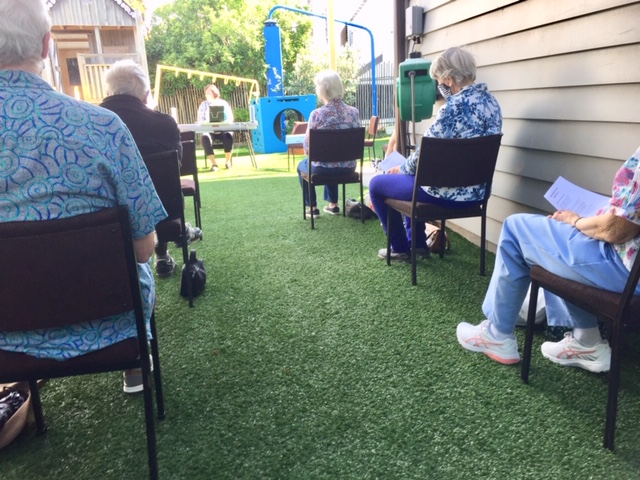 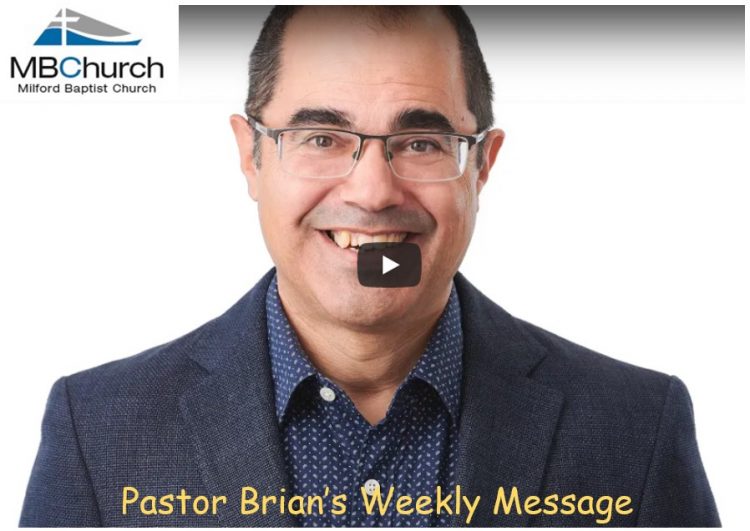 913 They brought to the Pharisees the man who had been blind. 14 Now the day on which Jesus had made the mud and opened the man’s eyes was a Sabbath.15 Therefore the Pharisees also asked him how he had received his sight. “He put mud on my eyes,” the man replied, “and I washed, and now I see.”

16 Some of the Pharisees said, “This man is not from God, for he does not keep the Sabbath.”

But others asked, “How can a sinner perform such signs?” So they were divided.

17 Then they turned again to the blind man, “What have you to say about him? It was your eyes he opened.”

The man replied, “He is a prophet.”

18 They still did not believe that he had been blind and had received his sight until they sent for the man’s parents. 19 “Is this your son?” they asked. “Is this the one you say was born blind? How is it that now he can see?”

20 “We know he is our son,” the parents answered, “and we know he was born blind.21 But how he can see now, or who opened his eyes, we don’t know. Ask him. He is of age; he will speak for himself.” 22 His parents said this because they were afraid of the Jewish leaders, who already had decided that anyone who acknowledged that Jesus was the Messiah would be put out of the synagogue. 23 That was why his parents said, “He is of age; ask him.”

24 A second time they summoned the man who had been blind. “Give glory to God by telling the truth,” they said. “We know this man is a sinner.”

27 He answered, “I have told you already and you did not listen. Why do you want to hear it again? Do you want to become his disciples too?”

28 Then they hurled insults at him and said, “You are this fellow’s disciple! We are disciples of Moses! 29 We know that God spoke to Moses, but as for this fellow, we don’t even know where he comes from.”

30 The man answered, “Now that is remarkable! You don’t know where he comes from, yet he opened my eyes. 31 We know that God does not listen to sinners. He listens to the godly person who does his will. 32 Nobody has ever heard of opening the eyes of a man born blind. 33 If this man were not from God, he could do nothing.”

34 To this they replied, “You were steeped in sin at birth; how dare you lecture us!” And they threw him out.

Watch the Sermon “What do you say about Jesus?”   – Brian D Lima (on-line)

831 To the Jews who had believed him, Jesus said, “If you hold to my teaching, you are really my disciples. 32 Then you will know the truth, and the truth will set you free.”

33 They answered him, “We are Abraham’s descendants and have never been slaves of anyone. How can you say that we shall be set free?”

34 Jesus replied, “Very truly I tell you, everyone who sins is a slave to sin. 35 Now a slave has no permanent place in the family, but a son belongs to it forever.36 So if the Son sets you free, you will be free indeed. 37 I know that you are Abraham’s descendants. Yet you are looking for a way to kill me, because you have no room for my word. 38 I am telling you what I have seen in the Father’s presence, and you are doing what you have heard from your father.”

39 “Abraham is our father,” they answered.

“If you were Abraham’s children,” said Jesus, “then you would do what Abraham did. 40 As it is, you are looking for a way to kill me, a man who has told you the truth that I heard from God. Abraham did not do such things. 41 You are doing the works of your own father.”

“We are not illegitimate children,” they protested. “The only Father we have is God himself.”

42 Jesus said to them, “If God were your Father, you would love me, for I have come here from God. I have not come on my own; God sent me. 43 Why is my language not clear to you? Because you are unable to hear what I say. 44 You belong to your father, the devil, and you want to carry out your father’s desires. He was a murderer from the beginning, not holding to the truth, for there is no truth in him. When he lies, he speaks his native language, for he is a liar and the father of lies. 45 Yet because I tell the truth, you do not believe me! 46 Can any of you prove me guilty of sin? If I am telling the truth, why don’t you believe me?47 Whoever belongs to God hears what God says. The reason you do not hear is that you do not belong to God.”