13 When it was almost time for the Jewish Passover, Jesus went up to Jerusalem. 14 In the temple courts he found people selling cattle, sheep and doves, and others sitting at tables exchanging money. 15 So he made a whip out of cords, and drove all from the temple courts, both sheep and cattle; he scattered the coins of the money changers and overturned their tables. 16 To those who sold doves he said, “Get these out of here! Stop turning my Father’s house into a market!” 17 His disciples remembered that it is written: “Zeal for your house will consume me.”[c]

18 The Jews then responded to him, “What sign can you show us to prove your authority to do all this?”

19 Jesus answered them, “Destroy this temple, and I will raise it again in three days.”

20 They replied, “It has taken forty-six years to build this temple, and you are going to raise it in three days?” 21 But the temple he had spoken of was his body. 22 After he was raised from the dead, his disciples recalled what he had said. Then they believed the scripture and the words that Jesus had spoken.

23 Now while he was in Jerusalem at the Passover Festival, many people saw the signs he was performing and believed in his name.[d] 24 But Jesus would not entrust himself to them, for he knew all people. 25 He did not need any testimony about mankind, for he knew what was in each person. 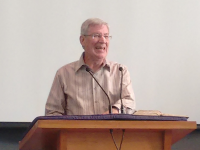 Joshua 14:9-10
9 So on that day Moses swore to me, ‘The land on which your feet have walked will be your inheritance and that of your children forever, because you have followed the LORD my God wholeheartedly.’
10 “Now then, just as the LORD promised, he has kept me alive for forty-five years since the time he said this to Moses, while Israel moved about in the wilderness. So here I am today, eighty-five years old!

The Gospel of John 01

1 In the beginning was the Word, and the Word was with God, and the Word was God. 2 He was with God in the beginning. 3 Through him all things were made; without him nothing was made that has been made. 4 In him was life, and that life was the light of all mankind. 5 The light shines in the darkness, and the darkness has not overcome it. 6 There was a man sent from God whose name was John. 7 He came as a witness to testify concerning that light, so that through him all might believe. 8 He himself was not the light; he came only as a witness to the light. 9 The true light that gives light to everyone was coming into the world. 10 He was in the world, and though the world was made through him, the world did not recognize him. 11 He came to that which was his own, but his own did not receive him. 12 Yet to all who did receive him, to those who believed in his name, he gave the right to become children of God— 13 children born not of natural descent, nor of human decision or a husband’s will, but born of God. 14 The Word became flesh and made his dwelling among us. We have seen his glory, the glory of the one and only Son, who came from the Father, full of grace and truth.  15 (John testified concerning him. He cried out, saying, “This is the one I spoke about when I said, ‘He who comes after me has surpassed me because he was before me.’”) 16 Out of his fullness we have all received grace in place of grace already given. 17 For the law was given through Moses; grace and truth came through Jesus Christ. 18 No one has ever seen God, but the one and only Son, who is himself God and is in closest relationship with the Father, has made him known.

The Humility of Christ

Sermons in the Book of Acts #16
Mark 2 : 1-8
Christians and Chaplains
Simon Greening
CEO of The Interchurch Council for Hospital Chaplaincy
MBC 27th June 2021