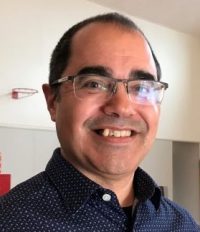 Listen to the Reading

18 When he had finished praying, Jesus left with his disciples and crossed the Kidron Valley. On the other side there was a garden, and he and his disciples went into it.

2 Now Judas, who betrayed him, knew the place, because Jesus had often met there with his disciples. 3 So Judas came to the garden, guiding a detachment of soldiers and some officials from the chief priests and the Pharisees. They were carrying torches, lanterns and weapons.

4 Jesus, knowing all that was going to happen to him, went out and asked them, “Who is it you want?”

5 “Jesus of Nazareth,” they replied.

“I am he,” Jesus said. (And Judas the traitor was standing there with them.) 6 When Jesus said, “I am he,” they drew back and fell to the ground.

“Jesus of Nazareth,” they said.

8 Jesus answered, “I told you that I am he. If you are looking for me, then let these men go.” 9 This happened so that the words he had spoken would be fulfilled: “I have not lost one of those you gave me.”

10 Then Simon Peter, who had a sword, drew it and struck the high priest’s servant, cutting off his right ear. (The servant’s name was Malchus.)

11 Jesus commanded Peter, “Put your sword away! Shall I not drink the cup the Father has given me?”

12 Then the detachment of soldiers with its commander and the Jewish officials arrested Jesus. They bound him 13 and brought him first to Annas, who was the father-in-law of Caiaphas, the high priest that year. 14 Caiaphas was the one who had advised the Jewish leaders that it would be good if one man died for the people.

Read the Sermon  “The Father That Suffers” – Brian D.Lima  (pdf)

Watch the Sermon  “The Father That Suffers” – Brian D.Lima